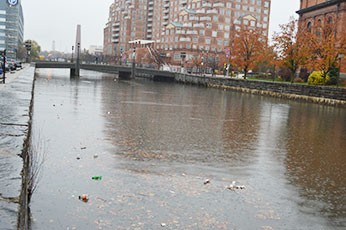 An Abell-funded report by the Environmental Integrity Project on Baltimore’s sewage mess.

In 2002, the U.S. Justice Department sued Baltimore over a chronic problem: the city’s leaky, overloaded sewer system was routinely and illegally releasing tens of millions of gallons of raw human waste into urban streams and the Inner Harbor. To settle the lawsuit, Baltimore signed a consent decree that required the city to repair its sewer system to “eliminate all” overflows and spills by January 1, 2016. The city missed that deadline – completing only about half of the required projects, despite having 14 years to do the work and raising more than $1 billion by tripling water and sewer bills for city residents. Despite a federal decree that should have halted the practice, Baltimore continues to intentionally pipe millions of gallons of raw sewage mixed with rain water into the Inner Harbor’s main tributary (the Jones Falls), leading to high fecal bacteria levels in the harbor. Worse, more than 400 city homes have been damaged by sewage floods over the last three years because the city’s sewage system continues to be overwhelmed.

What’s behind Baltimore’s sewage mess? The Abell Foundation sponsored an investigative report by the nonprofit Environmental Integrity Project (EIP) that examined the causes and context of the problems and offered solutions. EIP’s report, “Stopping the Flood Beneath Baltimore’s Streets,” was released on December 15, 2015, and received widespread media coverage: 34 news stories, including in The Washington Post, Baltimore Sun, Baltimore Brew, and on WYPR 88.1 FM, WBAL TV-11, and WMAR TV-2. The spotlight put pressure on the city to accelerate its repair of the dysfunctional system and do more to assist flooded residents.

The report concluded that city has been vastly under-reporting its sewage overflows and often failing to follow state laws that require public notification. Solutions include: 1) A revised sewage consent decree, with a tight new deadline and more oversight of the city by federal and state authorities; 2) Improved reporting, public notification, and financial transparency by the city; and 3) Immediate city assistance to vulnerable populations of city residents whose lives and homes have been disrupted by sewage floods.

A digital map of sewage overflows in Baltimore can be found here.