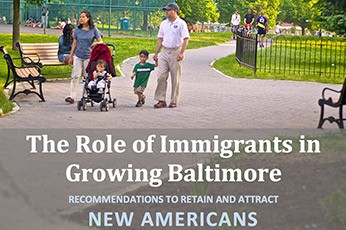 Recommendations to retain and attract new Americans: a report by the Mayor's New Americans Task Force.

Across the country, cities that are gaining in population have a vibrant and growing immigrant population. As of 2011, 45,000 foreign-born immigrants resided in Baltimore, more than half of whom had moved to Baltimore since 2000. In recognition of the contributions of New Americans to the growth of Baltimore, Mayor Rawlings-Blake appointed the Task Force on New Americans to research and recommend strategies for welcoming and supporting the expansion of immigrant and refugee communities.

“The Role of Immigrants in Growing Baltimore” encourages investment in six areas: workforce development, small business development, housing, and welcome, safety and youth initiatives. The Mayor’s Office of Immigrant and Multicultural Affairs (MIMA) will oversee implementation of the report recommendations as part of the Mayor’s stated goal to attract 10,000 families to Baltimore City.