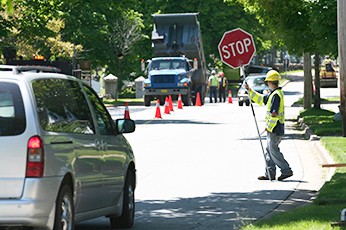 City infrastructure overruns and the challenge of transparency.

The health of a city is dependent on the strong infrastructure of transportation, water, power, and waste systems. Municipalities must invest millions of dollars each year into projects that improve and enhance those systems.

Infrastructure projects, like any type of project, sometimes run over their allotted time frames and budget amounts. Often those overruns are the result of unforeseen conditions and are a normal part of business, but how a city monitors and handles overruns is an important part of municipal stewardship.

This Abell Report began as an investigation into the extent of contractual overruns using publicly available data. Cristie Cole, of Firebrand Analytics, identified the 68 infrastructure contracts that were approved by the Baltimore City Board of Estimates (BOE) in fiscal year 2012 and which totaled more than $212 million. However, publicly available data on those 68 contracts pulled from three different agencies was incomplete and, at times, contradictory.

“The Opacity Problem: An Examination of Baltimore City Infrastructure Contracts” chronicles the unsuccessful efforts to access information from city entities and explains why those transparency issues are so problematic. Although city agencies are beginning to address some of those access and transparency issues by upgrading their project management systems, the report concludes that additional changes are necessary.