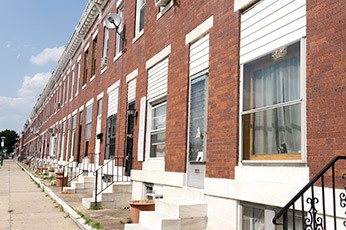 In response to unprecedented rates of overdose deaths, enduring morbidities associated with drug use, and the failed war on drugs, there has been increased interest in the U.S. in creative and effective interventions aimed to reduce harm to drug users and the broader community.

There is an opioid epidemic in the United States, and it is ravaging families and communities in Baltimore City and nationwide. In Baltimore City, there are currently an estimated 19,000 people who inject drugs.  During the first half of 2016, 290 people died from fatal overdoses, of which 51 percent involved fentanyl, a cheap synthetic that dramatically increases overdose risk.

Efforts to combat drug use through the war on drugs have proven ineffective, fueling the highest rates of incarceration in the world and deleteriously affecting public health. Taken together, these challenges have fueled interest in creative and effective interventions aimed to reduce harm to drug users and the broader community.

Safe consumption spaces (SCS) are one of those interventions.

Safe consumption spaces, now in operation in 66 cities in 11 countries, allow drugs to be consumed under supervision in an effort to reduce harm and improve medical outcomes for high-risk individuals. These safe spaces are staffed by medical or case management staff as well as current or former drug users, who do not assist in drug administration. The staff provides support by answering questions about safe consumption practices, providing sterile equipment and condoms, administering naloxone in the event of an overdose, and helping connect drug users to medical care and substance abuse treatment. They can also provide users with referrals to help them obtain housing, legal services and mental health treatment.

“Research has shown that people who utilize SCS take better care of themselves, use their drugs more safely, and have better access to medical, social and drug treatment services compared to {users} who do not access SCSs,” the report states. “SCSs play a key role in providing access to necessary services…It is expected that an SCS in Baltimore City would translate to considerable medical and social cost-savings.”

Dr. Sherman and her colleagues analyzes research into safe consumption spaces in other cities, including Vancouver, Canada, and Sydney, Australia.

Research has also shown that safe consumption spaces are cost-effective. A recent study of the Insite safe center in Vancouver showed it generated an annual benefit to society exceeding $6 million. Baltimore would likely see similar savings, through reduced overdose deaths and averted cases of HIV and other infections, the report finds.

The report notes that safe consumption spaces face significant legal challenges. It suggests that authorizing legislation by the General Assembly would provide sufficient legal protection to those organizations and individuals involved in operating such a space.