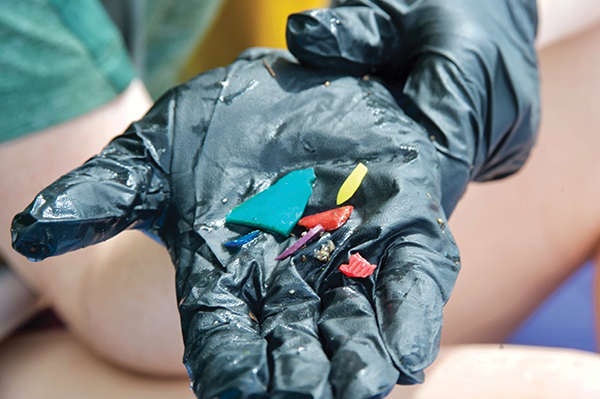 Microplastics pollution in Bay waters is an urgent issue that may affect the overall success of the Chesapeake Bay restoration effort.

Tiny pieces of plastic are in our water, in our air, in our food, in our drinks, in our bodies, and, increasingly, in our headlines. Seemingly everywhere researchers have looked, they’ve found microplastics – from the highest peaks to the bottom of the oceans. Yet, researchers are only beginning to understand what that means for our health and that of our environment. Does the persistent presence of plastics necessarily mean they are causing harm?

Early evidence suggests that microplastics could be one of several environmental factors—coupled with others such as climate change—potentially shortening the lifespan of marine animals. So far, microplastics have been found in the guts of everything from seabirds and fish to oysters and shrimp. But research has barely begun to look at what that could mean for the health of humans living increasingly in urban areas like Baltimore where seafood, drinking water, and even the air we breathe could contain tiny plastic particles.

In “Microplastics: The grand reach of our tiny plastics problem,” author Whitney Pipkin looks at the history of the U.S.’s love affair with plastics, what we currently know about microplastics, how they are getting into our environment, and the potential impact on wildlife and humans in the Chesapeake Bay watershed. The report also offers a few practical solutions to policymakers and consumers who are looking to reduce their own contributions to our growing microplastics problem.

Everyday activities such as washing clothes can release thousands of microplastic particles into local waters. A recent report estimated that the average household in Canada and the U.S. releases millions of microfibers from laundry into the wastewater treatment system every year, equating to about 968 U.S. tons of microfibers. That does not even include the impact of human behaviors such as illegal dumping or littering. Such plastic trash can wash into the nearest stormwater drain and waterway, breaking into smaller and smaller particles over time.

Despite our best efforts, less than 10% of the 8.3 billion metric tons of plastic estimated to have been produced over the past six decades has actually been recycled. Many of the plastics that haven’t been recycled or incinerated are still around in one form or another. And, each year, between 5 and 13 million metric tons of plastic waste end up in our oceans, where the pieces can be mistaken by animals for food or become vectors for harmful chemicals. If nothing changes, by mid-century, the oceans will contain more plastic waste by weight than fish.

A brand of innovation—not unlike what led to the development of durable plastics in the first place—has begun to filter into the milieu. While government leaders, business innovators, and individuals try to improve plastic production with the use of more biodegradable materials, the scientific community has zeroed in on microplastics as a less-understood—and equally urgent— consequence of our global plastics problem.

On the individual level, there is plenty to take away from a better understanding of plastics, microplastics, and their impact on the ecosystem and us – from the clothes we buy and how we wash them to the products that we didn’t even know contained plastic. Understanding the endgame of our plastics habits equips us to make better decisions about how we purchase, deploy, and dispose of plastics daily.