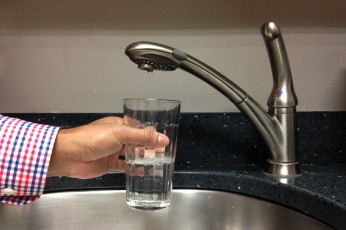 Strategies for addressing high increases in water and sewer rates for Baltimore's most vulnerable customers.

Across the country, cities like Baltimore, with aging infrastructure and concentrated poverty, wrestle with meeting the costs of a safe water supply and ensuring low-income residents have access to water they can afford.

This report, authored by Joan Jacobson, examines how Baltimore City can help low-income water customers as it faces mounting costs to repair its aging water system infrastructure. As in Jacobson’s previous Abell Reports on the city’s tax sale process and Vacants to Values program, Keeping the Water On aims to assist city government, advocates, and local citizens in their efforts to reform existing government practices.

One quarter of Baltimore’s population lives in poverty. Customers with low or fixed incomes already struggle to pay for housing, food, medicine and other basic needs. Without an adequate safety net, thousands of households are in jeopardy of losing water service as a result of unpaid bills. While the city sees turning off the service as a last resort, nearly 10,200 households who were behind on their bills were eligible for shutoff as of May 2016.

Baltimore is not the only city that is dealing with rising water and sewer rates. In many cities across the country, families pay a higher percentage of their income on water bills than the 3 percent recommendation from the United Nations. Baltimore’s rate falls in the middle of the pack, with low-income residents paying about 3.7 percent of their income, on average, for water.

While Baltimore City offers several assistance programs to customers who have fallen behind on their water bills, the city has not adequately promoted these programs. The city has recently made information on these programs more readily available, but it will need to do more to help the most vulnerable residents as costs continue to rise.

This report highlights several assistance models from across the U.S. that could inform improved and expanded strategies in Baltimore. These strategies include:

By examining other successful assistance programs and working to reform its customer service model, Baltimore can ensure that low income residents retain access to a basic service that supports human life: clean water.