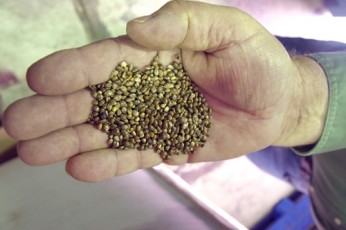 Hemp offers opportunities for new products, good jobs, and wellness. It can replenish our soils; reduce our dependence on pesticides that harm rivers and streams, the air, and bee populations; and save much needed water, especially as droughts become more common with climate change.

What if we discovered a plant that grew quickly and in multiple climates, could make everything from textiles to medicine to fuel, and could be more valuable to a farmer’s bottom line than most commodity crops?

We already have such a plant. In colonial days, farmers grew it and processed it to make paper, out-rig ships, braid ropes, sew clothing and manufacture canvas sacks. Even the first American flag, sewn by Betsy Ross, was made from it. In Asia, the plant’s uses reach back even further, at least as far as 6,000 B.C.

It’s hemp. And for close to a century, it has been illegal to grow in the United States of America.

Hemp comes from cannabis, like marijuana. But instead of producing a mind-altering state, hemp produces thousands of valuable products, mostly from its seeds and fibers. As of 2015, annual worldwide sales of hemp products were around $580 million, with hemp seeds driving this growth.

Hemp is good for the environment, too. It requires little to no pesticides; replenishes the soil; only requires a little fertilizer, and uses less water than cotton, which is important in these drought-prone times.

Despite its usefulness, hemp became nearly impossible to grow legally after 1937 and became completely illegal in 1970 when President Richard M Nixon named both marijuana and hemp controlled substances.

Now farmers, scientists, and entrepreneurs are questioning the wisdom of hemp’s illegality and demonstrating its usefulness in farms, factories, and labs in scattered sites across the United States. Hemp is legal to grow in Kentucky, and other states are poised to legalize it as well.

In “Hope for Hemp? A Misunderstood Plant Prepares for its Comeback,” veteran environmental journalist Rona Kobell explores hemp’s history, weighs the benefits and limitations of hemp and its possibilities for Baltimore and Maryland as a job creator and an environmentally friendly crop.