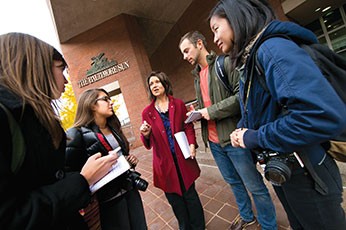 In the fall semester, the Baltimore Urban Affairs Reporting class at the University of Maryland’s Philip Merrill College of Journalism teamed with Kaiser Health News, the Washington-based national health policy news service, to investigate health care disparities in West Baltimore. The reporters wanted to explore: Why is it that in Baltimore, a city rich with world-famous hospitals and renowned medical researchers, many residents complain they have trouble finding good health care?  Why would residents of the city’s most affluent neighborhoods be living about 18 years longer than poorer people who live just a few miles away?  What the reporters found was that people without cars, smart phones, computers and credit cards have trouble getting the care they want from a health care system increasingly designed for patients who can drive to see specialists and can consult doctors online.  A series of small hurdles created huge barriers for Baltimore’s poorer residents. And the people our reporters interviewed felt rushed by their doctors and said they often couldn’t understand the instructions that doctors were giving them.

The Baltimore Urban Affairs Reporting class began in the fall of 2008 after a gift from the Abell Foundation to the Philip Merrill College. Under the direction of Sandy Banisky, Abell Professor in Baltimore Journalism, classes have explored issues including food deserts, East Side redevelopment, the city’s unsuccessful transportation system and human trafficking.

Photo by John Consoli/University of Maryland