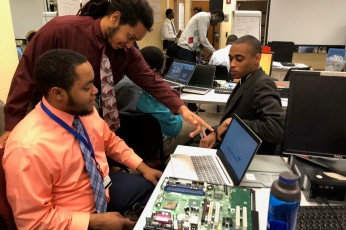 For putting youth on a pathway to a family-sustaining wage

For too many young people in Baltimore City, the gap between a high school diploma and a job that earns a family-sustaining wage appears unbridgeable.  With only half of high school graduates enrolling in college directly after high school, students in Baltimore City need alternative pathways to careers that pay living wages and offer opportunities for growth.

Year Up offers that kind of pathway.  Year Up is a nonprofit organization that provides low-income high school graduates and GED recipients, ages 18 to 24, with a year of information technology (IT) and business operations training, leading to technical careers with starting salaries of $30,000 or higher.  During the first six months of the program, participants are paid weekly stipends and attend classes at Baltimore City Community College (BCCC) focusing on IT Help Desk, Desktop Support, Cyber Security, or Business Fundamentals.  During the second six months of the program, students are placed in paid internships with local partner companies to gain work experience in IT.

Recently released results from a national randomized control trial demonstrate how large a difference Year Up can make in the life trajectories of its participants. In the Pathways for Advancing Careers and Education (PACE) evaluation, conducted by Abt Associates, participants in Year Up’s program significantly out-earn those who were eligible but did not participate.  Indeed, quarterly earnings for young adults who participated in Year Up were 53% higher than the control group six months after random assignment (Q6 and Q7 in the graph).  Two years after graduating from the program, participants’ wages remained 40% higher than the control group.

The outcomes captured at the national level are echoed at the local level.  Since opening its Baltimore site in 2010, Year Up has served 795 young adults.  About half (48 percent) of the young adults who enroll in Year Up have never taken a college-level course prior to entry and report a median personal income of $9,000 and a median family income of $20,000.  As of December, 89% of the July 2017 cohort graduates were employed and/or re-enrolled in college.  Employed alumni reported average starting wages of $16.35/hour and secured jobs as Security Analysts and Testers, IT Operations Specialists, Helpdesk Technicians, and Technical Support Analysts.  In a city in which the local minimum wage is $10.10, these kinds of entry-level opportunities are life altering.

The local employers who hire interns from Year Up represent a continuum of large, established firms like Exelon, Carefirst Blue Cross Blue Shield, and Brown Advisory and small, scrappy start-ups.  There are currently more companies who want internships than students to fill those seats.

Year Up attributes its success to a combination of programmatic elements. First, in addition to teaching the necessary technical skills, the program focuses on the interpersonal, professional skills that employers look for in new hires.  Second, Year Up offers assigns each student a mentor and provides wraparound supports to help students overcome the roadblocks that stand in their way. Third, participants create a community that empowers them to take risks, build confidence, and understand that it’s okay to ask for help.  Finally, the program maintains high expectations of its participants: it doesn’t lower the bar; it helps students surpass it.

Year Up Baltimore will serve 200 young people in Baltimore City in 2018 and expects to serve 240 in 2019. The Abell Foundation salutes Year Up for putting youth on a pathway to a family-sustaining wage.