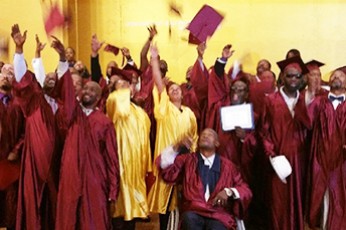 For justice reinvestment that provides opportunity and saves money.

On his way to work at Alewife restaurant on the West Side, Baye Parker, 34, explained how the Public Safety Compact (PSC) succeeded where everything else had failed.

“I had been in prison before and on parole before, but this was different,” he said. “PSC was different from the beginning.”

The Public Safety Compact was launched in 2010 with the goal of improving lives and freeing up resources for reinvestment in families and communities. Established through $2.3 million in grant funding by the Abell Foundation and other private foundations, the Compact was built in partnership with the Maryland Department of Public Safety and Correctional Services, Maryland Parole Commission, and the Safe and Sound Campaign.

The Compact is a policy and financing innovation that fuels better outcomes for individuals and the state. Specifically, by reducing the time spent behind bars, helping ex-offenders find employment and housing, and providing wraparound supports to them in prison and outside of it, the Compact seeks to reduce recidivism rates and re-invest the savings from the shortened prison stay back into the community.

Hathaway Ferebee, the executive director of the Safe and Sound Campaign, the organization that created the Opportunity Compact reinvestment model, said the Compact is “a new way of doing business, of taking tax payer money that is being poorly spent and spending money in a better way – to produce opportunities and measurable results for less public investment. It’s what we should be doing with tax-payer money.”

And the results are stunning.

As of August 2015, 797 individuals have been approved for the program with 572 released into the community. It has also saved the state $2.25 million in would-be expenses in the form of prison meals, medical services, medicine and linens. The savings are greater than the cost of the PSC operation and accrue from a mere 9.5% of the state’s actual cost of $39,000 to house a prisoner for one year.

Baye’s journey is a case study of how the program works in practice.

“Before I was released,” he recounted, “PSC got me in an in-house drug treatment program and connected me with a case worker. I did that for a few months. After I got out, the case worker got me into a job training program. She got me a mentor. If I had come home on regular parole none of that would have been afforded to me.”

As Baye explains it: “Parole is there to keep you in order, to uphold standards. But you’re not given any options. I didn’t have that until PSC. I’m even given a bus pass through PSC. That’s a big deal. On regular parole that’s a worry. With PSC it’s not a worry. It’s an opportunity.”

The Public Safety Compact has provided an opportunity to hundreds of returning citizens. It has helped them navigate their recoveries from substance abuse and granted access to mental health counselors, job training, peer mentors, and, yes, bus passes.

While the state allowed the Public Safety Compact to lapse on October 31st, leaders have stated their intent to keep the successful program going. Indeed, interest in these sorts of justice reinvestment initiatives is high, locally and nationally. Democratic and Republican leaders agree that the current costs of incarceration on individuals, families, and the state are too high and are unsustainable. There is bipartisan support for smarter, more effective ways to shrink the prison population while creating opportunities for returning citizens. Baltimore’s Public Safety Compact is and should be a model as that work moves forward.

“I’m a father, a husband, and a tax payer,” stated Baye. “Am I a convicted felon? Yes I am and that won’t change. But I’m also a graduate of PSC.”