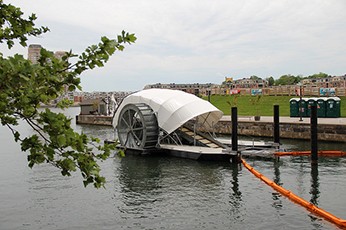 The contents of a dumpster are never pretty.

So why do environmentalists, residents, and city leaders celebrate? Because this trash is in the dumpster and not floating in the Inner Harbor.

In May 2014, the Waterfront Partnership installed the world’s first solar and hydro-powered water wheel trash interceptor at the mouth of the Jones Falls in Baltimore’s Inner Harbor.  The floating structure, with its elegant white tent canopy, captures trash and debris flowing downstream before it enters the Harbor.  One year later, the numbers are staggering.  The water wheel has removed over 182 tons of trash from the mouth of the Jones Falls.  On April 20th, during a huge rainstorm, the water wheel filled six and a half dumpsters and removed 19 tons of trash.

And while the volume of trash collected by the water wheel is impressive, it constitutes only a fraction of its impact.  Mr. Trash Wheel, as it is sometimes known, has become a surprise media sensation.  With over 1 million views on You Tube, a sizeable twitter following (@MrTrashWheel), and a legion of curious tourists and passers-by, the Water Wheel has captured the public interest and, by doing so, sparked new conversations about litter.

And it is a big deal. Trash is one of the three leading causes of pollution in the Baltimore Harbor (the others being storm water run-off and sewage) and harms the ecosystem both in the water and in the air above it.  Trash is also a public nuisance.  “Trash is a quality of life issue,” says Lawson. “It affects house values, neighborhood culture, everything.”

John Kellett and Daniel Chase have spent a lot of time pulling trash from the Bay over the years.  Sailors, engineers, and perpetual tinkerers, they had a vision for a clean energy device that could intercept trash before it reached the Bay.  In 2008, with support from the Abell Foundation, Kellett, Chase and their colleagues at construction company Clearwater Mills, built a pilot version of the water wheel and installed it at the Inner Harbor.  The pilot worked well and pulled trash efficiently from the water.  But the pilot also highlighted challenges in the initial design that needed to be addressed before taking the water wheel to scale.  After some tweaks and with significant investment from Constellation Energy and the Maryland Port Administration, the new water wheel was launched in 2014.

Here’s how it works: Trash and other debris flow down the Jones Falls and towards Baltimore’s Inner Harbor.  The trash is intercepted at the mouth of the Inner Harbor by high-grade booms, like those used to corral oil spills, and funneled toward a gently sloping conveyer belt.  The current of the Jones Falls turns the water wheel, which in turn powers the conveyer belt.  The trash is lifted out of the water by the conveyer belt and carried to a commercial-sized dumpster.  The dumpsters are transported by pontoon boat for disposal by Baltimore City Department of Public Works crews.  On days when the current is slow or non-existent, the water wheel is powered by solar panels that sit atop the water wheel’s tent-like shell.

The use of renewable energy allows the water wheel to help solve the problem of trash in the Bay in a remarkably efficient way.  According to the Waterfront Partnership, the water wheel budget is $128,900 per year to collect an estimated 300 tons of trash or about $430 per ton.  The Department of Public Works spends approximately $1.3 million per year on Inner Harbor Marine Operations including skimmer boats and other cleanup activities and collects, on average, 420 tons per year, which is approximately $3,000 per ton.  This is not a direct comparison, however, as the Inner Harbor Marine Operations service areas of the Harbor that the Water Wheel cannot reach.  That being said, the cost efficiencies of the water wheel are significant.

What’s next for Mr. Trash Wheel? “Now that it is a proven technology,” says Adam Lindquist, Manager of Waterfront Partnership’s Healthy Harbor Initiative, “we are seeking to raise funds to build more water wheels at other Baltimore Harbor outfalls.”  In June the Waterfront Partnership will launch a public fundraising campaign for a Canton Water Wheel to be located at the end of Harris Creek, a completely piped stream that flows beneath Canton, Patterson Park, McElderry Park, and several other neighborhoods.  “The ultimate goal,” says Lindquist, “is not to fill the world with water wheels, but to use them as a tool to implement policy change and behavior change on a large scale so that water wheels are no longer necessary.  As an eco-friendly trash collector, Mr. Trash Wheel can play a significant role in cleaning up water ways, but his larger mission is teaching people about the importance of doing so and what they can do to help.”

Abell salutes Mr. Trash Wheel, the team at Clearwater Mills, and the Waterfront Partnership’s Healthy Harbor Initiative for efficiently and cost-effectively removing trash, improving water quality in the Inner Harbor and making our city a cleaner, better place to live, work and visit.