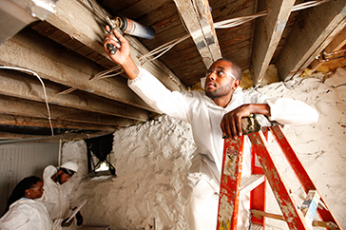 For building "pathways out of poverty" that build on the green economy and create meaningful change for individuals, families, and communities.

Every Tuesday at 1 pm about a dozen people show up at Civic Works’ training center to learn about opportunities with its Baltimore Center for Green Careers. Some are there at the recommendation of a cousin or friend; others have heard about it from a barber or parole agent. All are there because they want a better job and have heard that Civic Works’ Baltimore Center for Green Careers (BCGC) can help them get one.

Civic Works’ Baltimore Center for Green Careers (BCGC) was founded on the belief that the growing green economy has the potential to address two of Baltimore’s challenges: high levels of unemployment, particularly among returning citizens, and an aging housing stock that is energy inefficient, fossil fuel reliant, and contains environmental contaminants. By training residents in the skills necessary for green jobs, helping them secure positions in the industry, and making buildings more environmentally sustainable, the Baltimore Center for Green Careers is creating a positive cycle of change for individuals and communities.

Chaz Branch, 27, heard about the Center for Green Careers at the barbershop on a Friday. “Someone there showed me a flyer that said I could make $15/hour,” he remembered. “And since I was only making $10/hour at the time, I decided to go to the information session the next Tuesday. I had some background challenges, some vehicle challenges, and I didn’t have a stable place to live. And Civic Works helped with all of it.”

According to Eli Allen, Director of the BCGC, the program has worked hard to lower barriers facing would-be participants. “We don’t have any educational requirements or specific numeracy or literacy requirements. We work with people who have a range of criminal convictions, are really trying to rebuild their lives, and think our program might help them do that.”

To develop their programs, BCGC worked with industry leaders to align curricula that teach the necessary credentials in a hands-on way. During the five-week entry-level brownfields remediation training, for example, participants earn seven industry-recognized certifications and conduct a hands-on practicum. The three-month, entry-level solar and energy retrofit installer training programs provide one month of classroom-based instruction and two months of on-the-job training through Civic Works’ weatherization social enterprise, known as EnergyReady, and partnerships with solar employers. Once the on-the-job portion begins, they earn $10 an hour. They work full-time or 320 hours over a two-month period.

“But skills training is only part of the BCGC experience,” explains Allen. During the classroom portion of training, participants receive bus passes, hot lunches, and individualized case management, focusing on the challenges that are preventing individuals from working. For example, lack of access to reliable transportation can be a major impediment for individuals trying to get to job sites in far-flung parts of the city. To address that challenge, BCGC staff work with participants and government agencies to reinstate drivers’ licenses, which might have been suspended for unpaid parking tickets or child support arrears.  They also offer a 1:1 match savings program to help participants buy their own vehicles.

Branch raved about the comprehensiveness of his training. “From the instructors they brought in, the speakers who talked with us… It wasn’t just book teaching but real hands-on training. They taught us about our attitudes and our temperaments. They were tough when they needed to be, but that’s all right. I wasn’t the sharpest tool in the bag, but I took lots of little things from each conversation.”

In addition to skills training and case management, BCGC helps individuals like Branch secure employment within Baltimore’s green economy. BCGC has a community workforce agreement with a set of specific contractors, which requires them to exclusively hire BCGC graduates for entry-level installer positions, pay family-sustaining wages, provide professional support to build career mobility, not discriminate against individuals with criminal records, and perform high quality work. In exchange for this commitment, BCGC then connects the contractors with new customers, an agreement that has channeled $1.5 million of residential business into those companies which in turn drives the need for more employees.

This comprehensive workforce development approach is paying off. When training is completed, installers earn an average starting wage of $15.67 an hour plus benefits (which is an annual salary of $32,594); crew leaders earn salaries averaging $35,000 to $45,000.

Branch is one of Civic Works’ proudest graduates. Upon completing the program, he was hired by an energy retrofit company and then, one month into his job, was let go because of a problem with his credit score. He went back to Civic Works, continued training, and was hired by another company, EcoMize, as a weatherization installer. This month marks his two-year anniversary with EcoMize and, in that time, he’s completed energy check-ups on over 10,000 units and has received three promotions.

Branch’s greatest praise for the program? He has sent his younger brother, two cousins, and a bunch of guys he grew up with to the training. “Anyone who I bump into, who takes the time to listen, I just have to tell them. Even guys I see on corners, at gas stations on the way to work, I tell them about it. If they can get there early in the morning, they can get to a job early.”

Across its programs, BCGC has graduated over 550 participants since 2003 and maintained an average job placement rate of 85 percent. Since 2010, some 82 percent of graduates have remained employed for at least one year. Since 2009, some 92 percent of BCGC participants were formerly incarcerated or had a significant history of arrest and conviction, and 94 percent were African-American men.

The Abell Foundation salutes Eli Allen, Chaz Branch, and the Baltimore Center for Green Careers at Civic Works for building “pathways out of poverty” that build on the green economy and create meaningful change for individuals, families and communities.