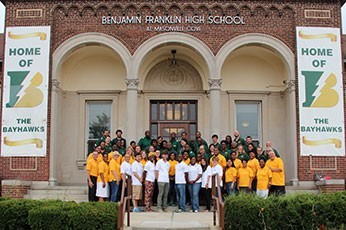 But there, at Benjamin Franklin High School in Masonville Cove, a school and a community are collaborating to create better outcomes for themselves and their children.

In 2009 when Dante de Tablan arrived at Ben Franklin High School, it was known as “Dirty Ben.” The social worker from Berkeley, California entered a building with crumbling ceilings, low enrollment (just over 200 students per year), and an abysmally low passing rate for algebra. The community surrounding the school was struggling too.  In 2010, Brooklyn/Curtis Bay had a crime rate of 81.7 per 1,000 residents (Baltimore City was 61.4) and a teen pregnancy rate of 111.1 live births out of 1,000 (Baltimore City was 53.3).

De Tablan was hired as the Community School Coordinator by the University of Maryland, School of Social Work and charged with coordinating services and supports at Ben Franklin for students and their families.  In his first year, de Tablan met every week with teachers, students, parents and community members to identify what the community needed of the school and how the school could best meet those needs. “I started by listening,” de Tablan remembered; “it’s the only way to learn what people want.”

By 2011, the school was ranked in the lowest 5% of schools in Maryland, which meant it was placed in “turnaround status” and received extra funding from the federal government, a new principal, and a restructured staff. Chris Battaglia was named principal in April 2011 and set to work building off of the framework that de Tablan and the community were developing.

“I had a huge benefit in getting ahead of the calendar,” Battaglia remembered. “We hired the staff we wanted, shaped the budget – all of those things that principals who start on July 1st just aren’t in a position to do. And I also had Dante and, quickly, Heather, and they made a huge difference in what we were able to do for kids and families.”

Heather Chapman arrived in the fall of 2011 as the Clinical Faculty member hired by the University of Maryland, School of Social Work. Chapman supervised the eight interns who rotate through the school providing mental health services, and by her second year, she was leading the Student Support Team and the school attendance strategy, in addition to her work counseling students and supervising.

“We didn’t want to be a “traditional” mental health office,” said Chapman. “We wanted to be integrated into the school. So we spend time in the hallways, the cafeteria, just hanging out and we’ve become an accepted part of the staff. That’s so important for kids because it takes away the stigma of ‘talking with someone’ – we talk with everyone!”

In an effort to address some of the systemic challenges that students at Ben Franklin face, de Tablan and Chapman launched and maintained an array of partnerships to strengthen and extend its work in the community. Those programs are now housed at the Ben Franklin Center for Community Schools (the Ben Center).

The United Way Family Center (UWFC) at Ben Franklin operates a workforce development program and an onsite early childhood development center.  The UWFC, supported by the United Way, Maryland State Department of Education (MSDE) and the Zanvyl and Isabel Krieger Fund, currently touches 73 families, most are Ben families and community members.  It allows 18 teen mothers to finish their high school degrees knowing that their babies are receiving excellent care and early childhood education.  Currently, the teen mothers at Ben Franklin have a 100% graduation rate; the average graduation rate for teen mothers is 40%.

The Family Stability Program (FSP), operated by the Social Work Community Outreach Service at University of Maryland School of Social Work and Pathway Church of God and funded by the United Way, is another of these efforts.  Since its founding, the FSP has prevented 80 families from becoming homeless in Brooklyn/Curtis Bay.

Ben Franklin High School also has an office for student service learning led by Debbie Wolley, a BCPS employee which seeks to connect students with 80 different partners who provide internships, mentorship, and job training. And, finally, the school will soon be getting an athletic field, with a lead gift by CSX and other major donors which will mean more than a “home field” for football and soccer games, but will provide opportunities for recreation and wellness for the community as a whole.

This growth isn’t without its challenges.  Ben Franklin launched an alternative program for 25 disconnected youth in the fall, but only 12 remain enrolled. It has welcomed back students from the neighborhood who struggled at other city high schools, and many continue to struggle at Ben, so graduation rates remain a challenge.

Last month, a recent alumna of Ben Franklin, Destiny Watford was recognized with the prestigious Goldman Prize for her successful grassroots organizing against the construction of a large trash incinerator in Curtis Bay. While Chris was quick to say that the staff at Ben Franklin had nothing to do with Destiny’s campaign, the genesis of Free Your Voice, Destiny’s student organization, was a human rights class at Ben Franklin taught by Greg Sawtell, a former social work intern. Chris’s pride in Destiny’s achievement was palpable.  Here was a young woman who listened to the needs of her community and demanded a better future for herself and for them.