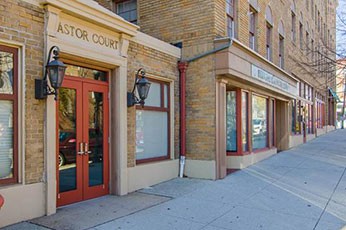 For the past decade, more than one hundred teachers new to Baltimore City public schools have found a home at the Astor Court apartment building on the prominent corner of 25th and St. Paul Streets in Baltimore, Maryland.

Attracted by its spacious units, central location, and below market rents, many stayed for the community they found there. Since opening in 2005, Astor Court has served multiple strategic purposes: revitalizing a previously vacant structure, attracting and retaining teachers for City Schools, and adding to the City’s tax base.  In the process, it became an early model of a strategy that is now spreading to cities across the country: developing purpose-built housing for teachers.

When developer Michael Rock approached the Abell Foundation in the late 1990s about acquiring and renovating Astor Court, the property had stood vacant for over a decade.  Delinquent on property taxes and water bills, Astor Court had become an eye sore and a strain on the community. At the same time, City Schools was trying to recruit 700 to 800 new teachers each year, a challenge with the system’s then quite modest salary structure. Developing an apartment building focused on renting to City Schools teachers solved both problems according to Abell Foundation President Bob Embry.

The project development had tiered financing with 11 different sources, including State and Federal historic tax credits and loans from the City and State that helped keep the rent structure appropriate for teacher salaries.

“We try to keep rents low,” explained Rock. “The partners we had in the early financing meant we were able to keep development and interest costs low. From that, we can offer teachers a discount below market rate.  We have a full rent roll, low turnover, and a great bunch of tenants.”

Astor Court has 36 apartment units (26 one-bedroom and 10 two-bedroom) and a number of common areas for meetings and socializing.  One tenant, who came to Baltimore with Teach for America, has been there since Day 1; most stay for a couple of years and then move on.  The annual turnover of 33% is on the low end of the industry average and speaks to the value that tenants find there.

Since Astor Court’s opening ten years ago, Seawall Development Corporation has brought award-winning Miller’s Court and Union Mill to the Baltimore market, proving not only the economic viability of the model but its attractiveness to tenants and design experts alike.

“Astor Court was really the first example in Baltimore of this kind of product,” said Seawall Development’s Thibault Manekin. “We learned a lot from how they put the project together and what it could mean for a neighborhood.”

In urban areas with high living costs, there is an increasing demand for affordable teacher housing.  Some cities and school districts are taking the more dramatic step of building their own affordable housing in an effort to retain teacher talent.  San Francisco and Cupertino (home of Apple) have each announced plans to build teacher housing in the coming years, joining Los Angeles, Milwaukee, and Asheville, North Carolina.